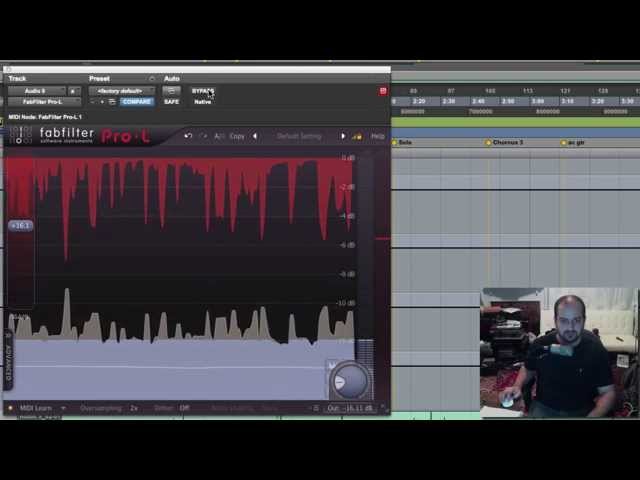 How To Set A Final Limiter For Mastering

Tips for setting your final limiter for mastering.

This is going to be a follow-up to my mastering tutorial, it’s all about setting the final limiter, which is probably the last step. A lot of times I am required to print the mix that will actually be the final mix sent to the duplication house and so understanding how to set a limiter is very important, it is going to be the final touch.

Now, the key to setting a limiter is constant gained monitoring. What that means is that however much is being input into the limiter, the same amount is being attenuated on the output for monitoring purposes. This will give us a more honest perspective of what the limiter is actually doing to the sound.

So let’s check this out. Here we have the Fab Filter Pro L. We’ve got two little controls here, the gain right here and the output right here. These are going to be the two most important controls that we work with. And that’s going to be true of any limiter. There’s nothing more important than the amount of limiting being done and how we monitor it. Everything else that we do down the line is going to be used to fine tune that.

So it looks like, according to these meter, we’ve got about, maybe eleven decibels until we hit absolute peak volume. We’re going to go a little bit further past that. we’re going to find the point of distortion and then we’re going to start backing it off. So let’s say sixteen decibels. So I’m turning up the gain and turning down the output. And what we’re going to hear is the signal hitting the limiter without changing the volume.

Okay, so that’s too much. The snare is getting totally flattened and there’s definitely some pumping going on. So let’s adjust it, let’s back it off to maybe, let’s try 13.5.

So that’s a lot more transparent. I think that that’s probably a good level, even if the band asked me to push it a little bit more, we could probably push it without too much damage. IN fact, just for the sake of demonstration purposes, let’s push it up just a hair more. Alright, great. So, now we’re going to play it and here we get into the fine tuning aspect of things. So, not all limiters are built this way. For a lot of limiters, this is going to be all you get, which is actually the most important thing. You set it, you find the level where it sounds best, where it doesn’t sound like it’s pumping or distorted and you leave it go.

But, we have a couple of other little tools in this. We have this advanced little section here, which has this style setting, a look ahead and attack and release. So these are all things that we can use to perhaps optimist the sound that we’re getting. Okay, but what do we want to optimize? What are we listening for? Well, distortion, minimal pumping, and the most natural articulation on the transience. Those are the things that I think would determine the best sound.

So, let’s start playing with some controls. I usually input the transience first. Because that’s usually the most distinct part.

Okay, so what was all that? Well, the biggest thing that changed was when I changed the style mode, when I changed it to dynamic, the snare popped right back to life. So that was a big, right there, a big improvement. The other things that mattered were the attack and the release. For this style of music, it seems like the further this attack goes, the more crispness on the snare I get. So, I’ve got it pretty far, I don’t really know how this corresponds to how the limiter is acting, it doesn’t sound like it’s clipping so, who knows? But anyway, I just set it and I keep listening for those transients and listening for the distortion, listening for the pumping and see what works the best.

So the slower attack here and the very slow release seem to the best most natural and switching it to dynamic also seemed to preserve the sound the best. The look ahead function was a little function, so if I turned it too short the transient disappeared, but if I turned it too long the transient also disappeared, so that was weird. But, yeah, anyway, I got something that I like. I’m going to set this to default and now we can AB between what we just came up with and the default setting.

26 thoughts on “How To Set A Final Limiter For Mastering”